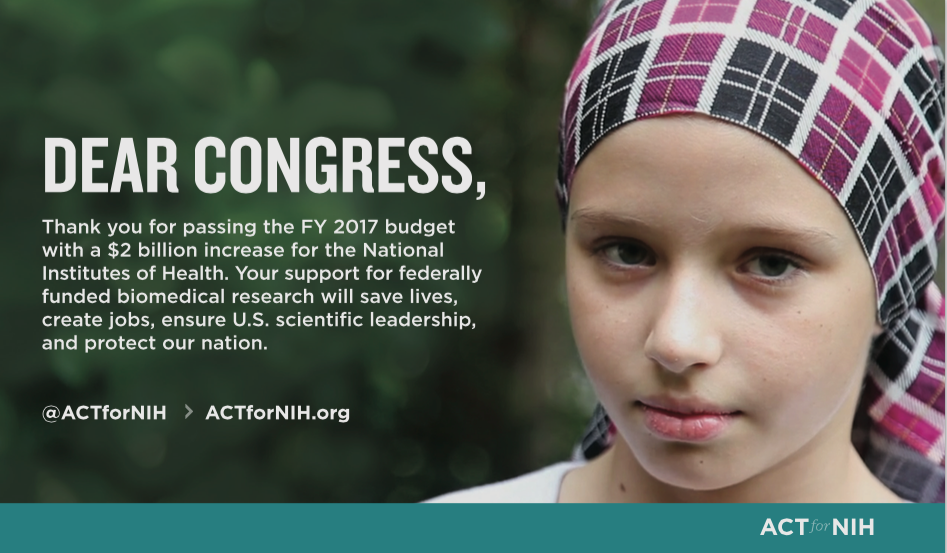 What outstanding news that Congress passed the FY 2017 omnibus with a $2 billion increase for NIH! The FY16 and FY17 appropriations make the first significant, back-to-back increases for NIH since 2003, and we hope and expect this trend continues for the foreseeable future.

As a way to publicly thank the House and Senate for their support of biomedical research funding, ACTforNIH ran this ad in Roll Call on Tuesday, May 9. We also ran considerable social media placements, as well, to celebrate this increase. While we know our work has already begun on FY18, we wanted to take a moment to celebrate another $2 billion for NIH and thank Congress for their support.

Senators Roy Blunt and Patty Murray, and Representatives Tom Cole and Rosa DeLauro give new meaning to the word “champion”. Their unwavering support for NIH funding, in such a tight budgetary environment, is a testament to their belief in the power of medical research.

Scientific promise has never been greater, and this increased funding delivers on the commitment Congress has made to restore NIH after years of neglect. This increase signals that the U.S. will remain the global scientific leader in curing disease, with a strong economy, and the ability to create high-tech high-wage jobs right here at home.